Trolled by a Trump 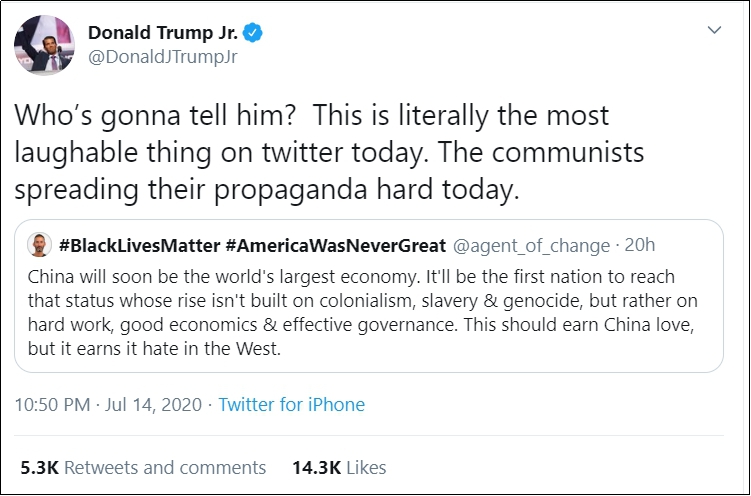 This article was written for the Chinese website Guancha, and was published on 23 July 2020. The original English text appears below.

The extreme sensitivity of the US to any reporting of the real situation of China-US relations was revealed by the following event. On Tuesday 14 July, I tweeted the following:

China will soon be the world’s largest economy. It’ll be the first nation to reach that status whose rise isn’t built on colonialism, slavery & genocide, but rather on hard work, good economics & effective governance. This should earn China love, but it earns it hate in the West.

This statement was almost immediately met with a fierce attack on Twitter by the son of the US president, Donald Trump Jr!

Why this extreme sensitivity from a Trump family member about a statement of obvious truth? Of course, there’s only so much you can say in Twitter’s 280 characters, but I wanted to have some input into the discussion in the West about the so-called ‘China threat’. Although there has been increasing hostility to China’s rise over the course of the past decade – starting with the launch of the ‘Pivot to Asia’ by the Obama administration in 2011 – anti-China rhetoric in the West has reached new levels of hysteria this year.

Western government and media are both constantly attacking China on the following false lines:

Since March this year, when the pandemic struck New York, this propaganda has become so loud as to be deafening, as the US administration desperately tries to find a way to deflect US attention away from its terrible failure to contain the virus. The US propaganda echoes across the Atlantic, as the British government – committed to a ‘Hard Brexit’ in which it withdraws from the EU Single Market and Customs Union – follows instructions from the US in the hope that this will lead to a good US-UK trade deal.

Because people in Britain, where I live, are exposed to anti-China propaganda on a daily basis, myself and others try to put forward another, more accurate, side to the story: to show people that China’s rise doesn’t need to be considered as a threat; that China deserves credit for its achievements in overcoming the Century of Humiliation, joining the ranks of the technologically-advanced countries, and lifting hundreds of millions of people out of poverty. We hope to promote the idea that friendly win-win cooperation between the world’s great countries is both possible and desirable.

So that’s the context for sending the tweet mentioned above. This tweet quickly became popular, with several thousand ‘likes’. Somehow, after a few hours, it reached the feed of a certain Donald Trump Jr, son of the sitting US president. Trump Jr reposted the tweet, along with the comment:

Who’s gonna tell him? This is literally the most laughable thing on twitter today. The communists spreading their propaganda hard today.

For the next 48 hours, my Twitter notifications became completely unusable, as I was receiving many hundreds of messages an hour from Trump supporters in the US telling me I was an idiot, that China is a colonial power, that China has only become successful by copying American technology, and so on.

Somewhat ironically, a large number of these Trump supporters criticised me for not caring about the human rights of the Uyghur population in Xinjiang, claiming they were being denied freedom of worship. Given that Trump introduced a Muslim travel ban in 2017; given that Mike Pompeo is well known for his horrible anti-Muslim rhetoric; and given the US record in bombing Muslim-majority countries in the Middle East, it may seem surprising that American right-wingers are so concerned about the Uyghur people. The reality is of course that they’re not concerned about the Uyghur people at all – they’re simply looking for any opportunity to criticise and slander the People’s Republic of China.

Thankfully some prominent and intelligent people, not only in the West but in China, for example Zhao Lijian and Wang Wen, supported my message, and this online Twitter battle wasn’t too one-sided.

This social media fight between myself and Donald Trump Jr has a much broader significance, and is in fact a reflection of the key global political struggle of this era: between the forces of peaceful multipolarity and ‘win-win’ development on the one hand, and the forces of aggressive hegemonism on the other.

The reason that China’s rise, when translated into the language of US policymakers, is a ‘China threat’ is that China’s emergence as a major economic power means that the era of US unipolar dominance is coming to an end. It is simply not realistic to expect that the global economy and the framework of international relations will continue to operate primarily in the interests of the US (or more specifically, the US ruling class).

Working through the UN, the G20, the WTO, along with regional organisations such as the SCO, and developing the broadest possible economic cooperation via the Belt and Road initiative, China is helping to construct a more democratic, multipolar system of international relations. This is a “rising tide that lifts all boats” – a world in which multiple centres of power, in both competition and cooperation, create an equilibrium that promotes long-term peace and rising prosperity.

Unfortunately, elements of the US ruling class are struggling to adapt to this new reality, hoping instead that they can create a ‘New American Century’. In terms of global politics, this is the real meaning of ‘Make America Great Again’: Make America Hegemonic Again. Many of these forces have oriented to Donald Trump, because his idea of ‘greatness’ is the easy road, denying the need for any major strategic shift, denying the inevitable nature of a new global reality. Indeed as Kishore Mahbubani has written, Trump “has divided America on all his policies, except one: his trade and technological war against China.”

A clash of civilisations is neither necessary nor inevitable. If the fundamental national interest of both the US and China is to improve the wellbeing of their populations, it’s obvious that the two countries should cooperate towards that end and avoid major conflict. Humanity faces several very serious problems – climate change, war, hunger and pandemics among them – and they require global cooperation to solve.

Towards this end, some activists have set up an international initiative called No to the New Cold War, which will have its first public meeting on Saturday 25 July (9pm CST). Speakers at this meeting include Wang Wen, Yang Hanyi, Martin Jacques, John Ross, US peace activist Medea Benjamin, Venezuelan minister Carlos Ron, and the Chinese-American group Qiao Collective.

More information can be found at www.nocoldwar.org