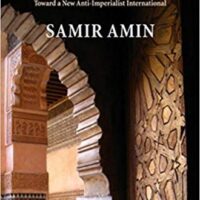 A slightly modified version of this article first appeared in the Morning Star on 25 June 2019.

The first volume of Samir Amin’s memoirs, A Life Looking Forward: Memoirs of an Independent Marxist, was first published over a decade ago, in 2006. It dealt primarily with his early life and the experiences that contributed to his intellectual formation and the major ideas with which he is associated: the critique of Eurocentrism; the notion of the ‘long transition to socialism’; and his insistence on ‘delinking’ from the imperialist triad of the US, Europe and Japan.

This second (and final) instalment, published now a few months after his death, combines a reiteration of Amin’s key political ideas with a whirlwind tour of the dozens of countries he visited – from Algeria to Zambia, and including many places one doesn’t hear about often enough: Mauritania, Benin, Mali, Senegal, Western Sahara, Peru, Haiti, the Dominican Republic, Madagascar, Mongolia, Niger, Nepal and East Timor.

Sometimes an advisor to the government, sometimes a guest lecturer, and sometimes just visiting friends, Amin always sought out the local movements working for progressive change, be they part of socialist or radical nationalist states or underground groups fighting for liberation. As such, the reader is introduced to a dizzying array of fascinating people and important ideas from around the world. The book gives a flavour of the state of politics across the continents (with a particular focus on Africa, Asia and Latin America). In particular, the reader gets a feel for the innumerable challenges and contradictions involved in the process of building towards socialism in a hostile world.

A recurring theme in the the book is the idea of responding to capitalist globalisation with a globalisation of struggle. This concept is all the more urgent in a context where long-established networks of solidarity are being (or have been) broken down, the result of fragmentation of production, sustained attacks on unions, casualisation of labour, and the replacement of certain branches of productive labour by automated processes. Amin calls on the global progressive movement to take on board the Occupy movement’s slogan of “We, the 99 percent”, recognising both the diversity and common fundamental interests of “the new generalised proletariat” in order to unite a broad array of forces: workers (including ‘informal’ ones), peasants, critical intelligentsia, and the progressive elements among the middle classes.

Amin notes that Latin America – led by Cuba and Venezuela – has taken the lead in this project. “The movements that have mobilised there are not small, marginal organisations or movements limited to the middle classes. There are large, popular (in the good sense of the term) movements, leading into action masses of people counted in the millions. That is what I call a revolutionary advance.”

Amin also reminds us of the number one priority for progressive forces throughout the world: “defeating the US project for military control of the planet.” This project of US global hegemony specifically aims to divide and rule those countries outside the imperialist triad. All the more important therefore that we promote the closest possible coordination between China, Vietnam, Russia, India, and the progressive states of Africa and Latin America. Writing elsewhere, Amin puts forward a straightforward proposal: “Russia should unite with China, the Central Asian countries, Iran and Syria. This alliance could be also very attractive for Africa and good parts of Latin America. In such a case, imperialism would be isolated.”

Having witnessed the radical nationalist projects in both Egypt (in the Nasser era) and Algeria at close quarters, and seen their successes and weaknesses, Amin proposes ‘democratisation’ as a key measure for sustaining progressive projects and allowing them to develop in a socialist direction. This democratisation means constantly pushing to engage more people in the organisation of society; it means constantly struggling against corruption, alienation and bureaucratisation; it means serving the masses and putting their needs first. Amin distinguishes democratisation, a continuous and complex process, from the simplistic idea of democracy that’s promoted by the major capitalist countries: a plutocratic “low-intensity democracy” where multiple parties represent the same (capitalist) class interests. This all too easily “turns into farce and runs a serious risk that the struggle for democracy will lose legitimacy.”

The Long Revolution of the Global South is a captivating and endearing read that will spark the interest of all those interested in the worldwide struggle for socialism.