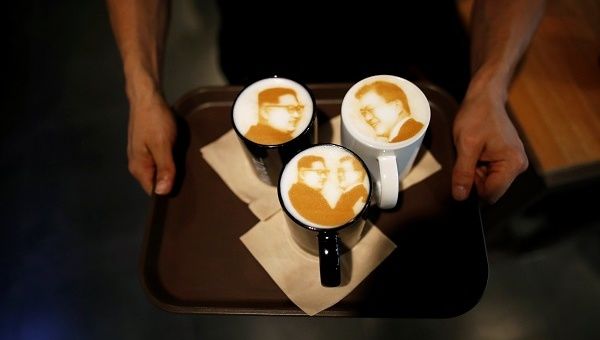 This article first appeared on Telesur English on 15 June 2018.

This week witnessed a historic step towards lasting peace in Korea. For the first time in history, the heads of state of the US and North Korea met face to face. The meeting appears to have laid the ground for ongoing top-level talks, and US president Donald Trump has announced that the joint war games conducted by the US and South Korea are on hold.

Given that just a few months ago, Trump was threatening nuclear war against the DPRK and referring to its leader Kim Jong-un as “rocket man”, these developments are breathtaking and extremely welcome.

But what changed? Has the Trump administration decided to abandon US imperialism and engage usefully with an increasingly multipolar world? Have some of the most sinister and vicious ‘hawks’ in Washington, like John Bolton (National Security Advisor) and Mike Pompeo (Secretary of State), unexpectedly led a volte-face in foreign policy?

Needless to say, nothing could be further from the truth. In every corner of the earth, the Trump administration has been making it all too clear that ‘Make America Great Again’ is, at its heart, an arch-neocon project. In April, the US carried out missile strikes against the Syrian state for the first time. In May, Trump announced that the US would exit the Joint Comprehensive Plan of Action and reintroduce sanctions against Iran. Sanctions against Venezuela have been ramped up, and its recent presidential election declared ‘illegitimate’. The steps towards bilateral normalisation between the US and Cuba are being reversed. In an outrageous attack on the national rights of the Palestinians, the US has moved its embassy in Israel to Jerusalem. Trump has fired the opening salvoes in a trade war with China. The US has bolstered its support for the breakaway Chinese province of Taiwan, and for the brutal and reactionary Kingdom of Saudi Arabia.

The globally hegemonic leopard has not changed its spots. To locate the key variables driving change, we must shift our gaze eastward.

One very important change is the stance of the South Korean (ROK) government. President Moon Jae-in came to power last year on the basis of a campaign promising, among other things, a serious bid to improve relations with the DPRK. Moon, a former student activist and human rights lawyer, represents the most progressive wing of mainstream South Korean politics (admittedly this is not saying much) and was mentored by Kim Dae-jung, author of the ‘Sunshine Policy’, which aimed to build understanding and de-escalate tensions with the DPRK.

While essentially pro-US, Moon is on record as saying that “South Korea should adopt diplomacy in which it can discuss a US request and say no to the Americans”. This is consistent with the wishes of the vast majority of the South Korean population, for whom the country’s status as a semi-colony of the US is a source of profound shame – Camp Humphreys, just 40 miles south of Seoul, is “the largest power projection platform in the Pacific”, and is the largest US overseas base; meanwhile the US maintains wartime operational control of the South Korean armed forces. Incidentally, another important Moon policy is to take back wartime operational control.

Moon also opposed the deployment of Terminal High Altitude Area Defense (THAAD) and is in favour of improving relations with China. The China issue is critical. Throughout its history, the ROK has been heavily reliant on the US, both militarily and economically. South Korea was given preferential treatment in terms of technology transfer and foreign investment specifically so that its population wouldn’t be too attracted by socialism (most people are unaware that the DPRK was economically more advanced than the ROK until the early 1980s, and that the ROK only really started on the path of economic growth on the back of massive aid and preferential market access due to its military role supporting US genocide in Vietnam).

These days, however, the regional economic landscape has changed beyond recognition. China is now South Korea’s number one trade partner by a long way – ROK-China trade is double that between the ROK and the US, for both imports and exports – and it doesn’t take a genius to predict that this trend will deepen as China continues to grow. This economic shift lays the foundations for a political shift, as the South Korean ruling class’s dependence on the US starts to wane. It also gives China a certain amount of leverage. China is a longstanding ally of the DPRK; it wants to see denuclearisation of the Korean Peninsula; it wants and needs a peaceful regional environment; it wants to limit the US military threat against it (and hence it is resolutely opposed to THAAD and would very much like to see the removal of 30,000 US troops from Korea); it also wants to ensure that Japan doesn’t develop a nuclear arsenal. All of this means that China is pushing hard for an improvement in relations between the DPRK and ROK, and between the DRPK and the US.

Meanwhile, the North Korean leadership has in recent months outwitted the US in the diplomatic realm, showing itself to be serious in its pursuit of peace. US vice president Mike Pence went to the Winter Olympics in Pyeongchang (ROK) with the specific intent of impeding any North Korean charm offensive, but he was uniquely unsuccessful: North Korean politicians, athletes and even cheerleaders acquitted themselves brilliantly and won widespread respect. This was soon followed up by two face-to-face meetings between Kim Jong-un and Moon Jae-in, as well as two meetings between Kim Jong-un and Chinese president Xi Jinping. Thus a path to progress has been opened up over the last few months by the leaderships in North Korea, South Korea and China, specifically excluding the US until the East Asian neighbours could present a united front.

The ground has now been laid for a historic advance, although it will no doubt be a rocky and winding road.

Jimmy Carter wrote last year that the North Koreans have been very consistent in their requests of the US: ”What the officials have always demanded is direct talks with the United States, leading to a permanent peace treaty to replace the still-prevailing 1953 cease-fire that has failed to end the Korean conflict. They want an end to sanctions, a guarantee that there will be no military attack on a peaceful North Korea, and eventual normal relations between their country and the international community.”

The people of the world – and especially the US – should add their voices to these entirely reasonable demands. The Korean people on both sides of the 38th parallel desire and deserve peace, stability and reunification.